How A Foot in the Door is Helping Make Change

At the Colorado Department of Human Services, we are partnering with Prosperity Now to plan and design a two-generation, anti-poverty strategy to help families and children get ahead economically through college savings accounts and financial literacy. Prosperity Now showed the film at a meeting of department executives and later at a meeting of potential partners from the public and private sectors. There were sighs and wows after each showing. A few weeks later, the executive director of one of our metro-area county human service

Agencies asked to borrow the film to help motivate Julia Martinez’ executive team around the project. I think people identify a little bit with the Superintendent in the film who originally was skeptical about K2C but then are very inspired that this one city government—San Francisco—actually made it happen. A Foot in the Door tells a compelling story of children, hope and possibility that has inspired us as we move forward with our project in Colorado. We hope to show the film to people in the governor’s office before too long. 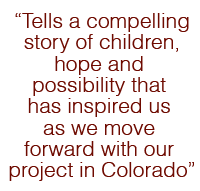 Julia Martinez, Strategic Policy Advisor, Colorado Department of Human Services
“As part of our community development initiatives, we are very interested in setting up youth savings accounts. A Foot in the Door explains how these accounts could be structured in a very accessible way. I’ve shared it with our whole staff and the administrative officer of the tribe who will be sharing it with the tribal council. The film tells a human story in a way that captures the viewers attention very well.
It’s great to see people sit through it without being impatient and doing other things! We have never seen anything like this—that speaks so strongly to our situation and the vision we have. As we continue to advocate, we will keep showing this video.”

Lakota Mowrer, Assistant Director Four Bands Community Fund,
a Community Development Financial Institution serving the Cheyenne River Indian Reservation, South Dakota
Our role at the Federal Reserve Bank of St Louis is to bring information, strategies and resources to non-profit, financial, and academic institutions as well as local government agencies. One of the communities we work with is Evansville, Indiana. I shared A Foot in the Door with the coordinator of Evansville’s Bank On initiative (helping members of the community who are “unbanked” to find alternatives to using high cost financial services).
She was very excited about it and will be showing it to the Mayor there. I’m also working in Louisville, KY to set up a similar program and plan to screen the film there as well. Of course, it would be great to be able to have staff from San Francisco speak at every meeting! But since that’s not possible seeing the K2C program come alive in the film is very very helpful.” 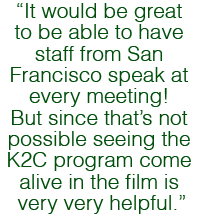 “We are launching a three-year plan to start a Children’s Savings Account program in partnership with Head Start. Citi Foundation is providing funding for a pilot CSA program in Salt Lake City and Ogden. It’s been so helpful to be able to show this film to the staff at different credit unions and to the family advocates at Head Start. Usually when I tell people about Children’s Savings Accounts, it’s like ‘yeah, yeah, sure’ but when I can show it to them, it makes a big difference. Most of the bankers liked the idea when I explained it to them, but showing the movie was like the cherry on top. It got them super excited about it. 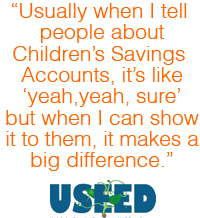 “I am working on a project that has a long-term goal of reducing poverty through asset building in Iowa, Minnesota, and North Dakota—beginning with a needs assessment in rural communities. Our focus group findings suggest that CSAs in conjunction with financial literacy education is a promising strategy. The film has been very effective in helping me explain what CSAs are.
I haven’t shown it to a single person who hasn’t been touched and motivated by it, including a United Way director, the state education staff member in charge of financial literacy (who in turn showed it to the director of the department) and other community leaders who make things happen. A picture is really worth 1000 words! “ 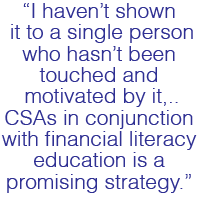 The economy of western New York state has been in a slow downward spiral for decades. As a HUD Approved Counseling Agency, we have found that “matched savings” – together with financial education – is the key to independence for low and moderate income individuals.When Prosperity Now premiered A FOOT IN THE DOOR at the 2012 Assets Learning Conference, there wasn’t a dry eye in the house. Since everyone enjoys a movie, we decided to use A FOOT IN THE DOOR to explain matched savings, reach out emotionally and open the door to decision makers.

The Chairman of the Board of Monroe Community College grasped the concept immediately and wrote back that it should be implemented nationally. He opened the door to the President of MCC who enthusiastically embraced matched savings.We also premiered at the annual New York State Community Action Association conference in Albany. Everywhere we use it, A FOOT IN THE DOOR, opens doors. On a scale of 1 to 10, this film is a 12!

I’ve been following GroundSpark’s work for years so was curious about how A FOOT IN THE DOOR could be used here in rural Minnesota. Our county is the third poorest in the state and we are connected to three reservations: White Earth, Red Lake,and Leech Lake.
The poverty and the homelessness here is staggering. I showed the film to our mayor, hoping to plant some seeds to help our youth have a better future. And soon I’ll be meeting with the people who run our youth shelters. It’s hard to move this idea forward here, but I’m going to try. The film makes a really compelling case.

NCCEP works with grantees of the federal GEAR UP program (Gaining Early Awareness and Readiness for education), a college access program that provides funding to improve the educational outcomes of low-income and first generation students.
GEAR UP programs serve students all across the country, and each program is required to have a financial literacy component. Several are implementing Children’s Savings Accounts as an important way to build assets and aspirations for college. A Foot in the Door demonstrates a great example of a universal approach to creating CSAs.”

Wonderfully clear, well-made, and absolutely inspiring. You managed to answer each of my questions (i.e., who holds these accounts?) almost as soon as they came into my mind.
A Foot in the Door  should function much like Johnny Appleseed, seeding a healthy future. This kind of a program should spread far and wide!”

– Barbara Abrash, former Director of Public Programs for the Center for Media, Culture and History at New York University, member Board of Directors, Working Films.